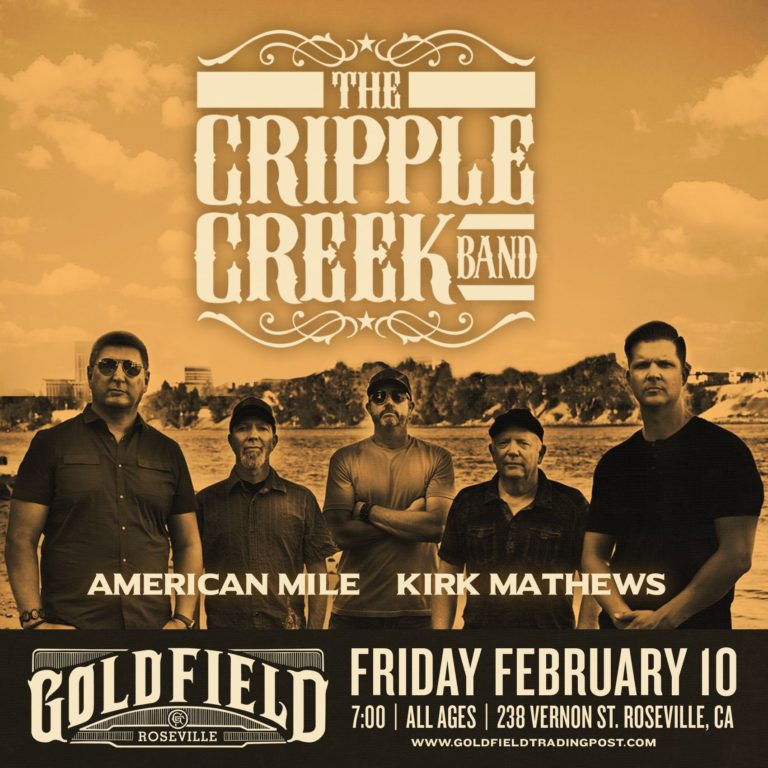 We are excited to bring The Cripple Creek Band show to the Goldfield’s in Roseville!  We are honored to share the stage with KNCI’s 2022 rising start winner Kirk Mathew and are good friends American Mile!

Kirk Mathew and Los Vaqueros will be kicking off the night!  Kirk plays his own brand of country music that features legends of the 70’s, 80’s and 90’s.  He pays tribute to the artists like Tyler Childress, Jaime Johnson, Johnny Cash, Waylon Jennings, Hank Williams Jr., Toby Kieth, Joe Nichols, Cody Jinx, Morgan Wallen and many more!

After Kirk, American Mile will be taking the stage.  In the past few years, American Mile has been carving their name into the roots of rock music around North America. With influences ranging from Aerosmith and The Black Crowes to Chris Stapleton and Tom Petty, their powerful sound has garnered them important shows in front of thousands at festivals and shows such as Summerfest, the NASCAR Auto Club 400, and a NYE headlining slot at The infamous Idaho Potato Drop in Boise. American Mile is in constant pursuit to showcase the vocal harmonies of Country-Rock while presenting it in a modern way.

Closing out the show will be The Cripple Creek Band.  Since 2012, The Cripple Creek Band has released 3 x albums, 2 x singles and several music videos, while consistently evolving and improving their live show. The CCB has a unique sound that tastefully combines Country, American, and Southern Rock music. For the CCB it is truly all about the music! The CCB influences include Lynyrd Skynyrd, Waylon Jennings, Alabama, Eagles, Hank Williams Jr., John Mellencamp, Travis Tritt, Eric Church, Merle Haggard, Blackberry Smoke, Chris Stapleton, Tom Petty, and The Band.